Gateway to the Isles

Oban is the ‘Gateway to the Isles’, and it’s just a ferry ride away to enchanting isles such as Kerrera, Lismore, Mull, Iona, Coll. Outdoors activities abound, from relaxing boat tours, cycling, beach combing, diving, hill- walking, kayaking or fishing-it’s easy to get out in the pure island air and leave the workaday world behind. 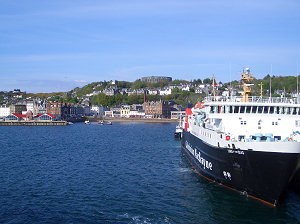 Scotland's largest ferry operator, Caledonian MacBrayne, or CalMac Ferries as they are known locally, operate an extensive service from Oban. During the summer months the company offer a range of Day Trips from Oban including whale watching and a wildlife adventure tour.

Up to the minute information on sailing times, ticket prices and special deals can be obtained from the CalMac website or from their telephone enquiry line on +44 (0) 1475 650100.

Just across the bay from Oban lies the scenic Isle of Kerrera, so named by Norse invaders in their language for “island of coppiced trees”.  Today, the trees have given way to pasture for sheep and cattle, and a sparse population of only 30 something residents live on the island, which measures seven by two kilometres and is divided into a south and north half.

You can reach the smaller north part of Kerrera via a short ferry ride from Oban’s North Pier for a short stroll around Hutcheson’s Monument, a Victorian memorial to one of the founders of the Caledonia MacBrayne ferry company. Enjoy the views back to Oban and across to the Isle of Mull. 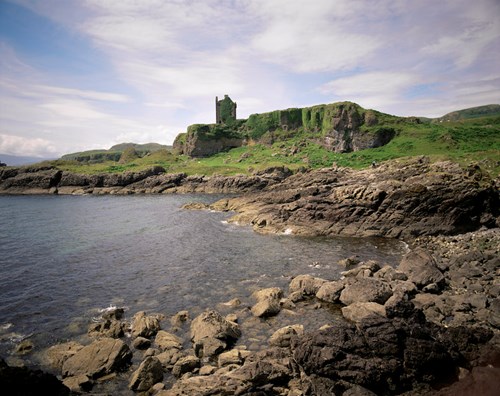 If you fancy a bit more of a hike, catch the south Kerrera ferry and attack the 11 kilometre walking trail that circles the island and visits the moody ruins of Gylen Castle. Built in the late 1500s by Duncan MacDougall and burned in 1647, the castle, known in Gaelic as “Caisteal nan Geimhlean”, is remarkably well preserved, and its location on a rocky peninsula atop steep cliffs is particularly dramatic. The island, which seems to be unspoilt by modernity, teems with wildlife, so be on the lookout for otters, sea eagles, wild goats and Sika deer, not to mention intriguing geology and sea views for days.

The Isle of Lismore lies in Loch Linnhe, at the southern end of the Great Glen. Its English name is taken from the Gaelic "Lios Mor", literally translated as Great Garden. And this gives a clue to why the Island is worth a visit. Throughout the year there is an ever-changing display of wild flowers crowding the roadsides and verges. And as if that wasn't enough, the island is also rich in historical sites, wildlife and magnificent views. 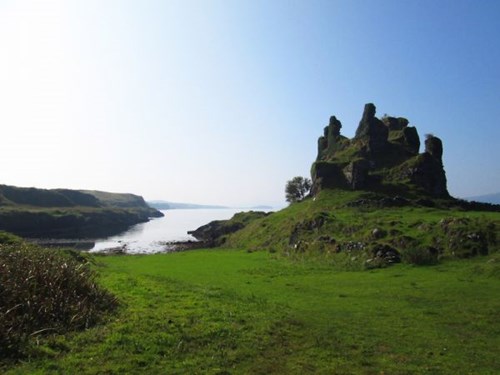 With a proper choice of ferries, you can have up to six hours ashore, which is an ideal introduction to the island. The ferry from Oban to Achnacroish on the island's south west takes about an hour, and carries a limited number of cars so booking in advance is advisable. Alternatively, leave the car in Oban and take a bike. The island is only about ten miles long and one mile wide so you will still be able to see a great deal. There is a cafe and historical centre which is well worth a visit.

Duart Castle on the Isle of Mull. Image courtesy of VisitScotland.

Boasting spectacular wildlife and scenery, as well as outstanding seafood and amazing castles, Mull is truly up there with some of the world’s finest tourist attractions. Lonely Planet lists ‘going wild on Mull’ in its guide to 40 amazing experiences in Europe. Referred to as ‘Eagle Island’ by some, the Isle of Mull is the best place in the area to see White-tailed and Golden eagles. Mull boasts some of the best sea life tours anywhere.  In fact, The Telegraph named Mull number four on its list of the 10 best places in Europe to spot whales. 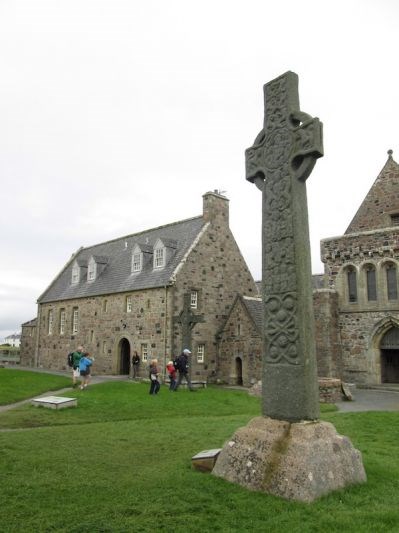 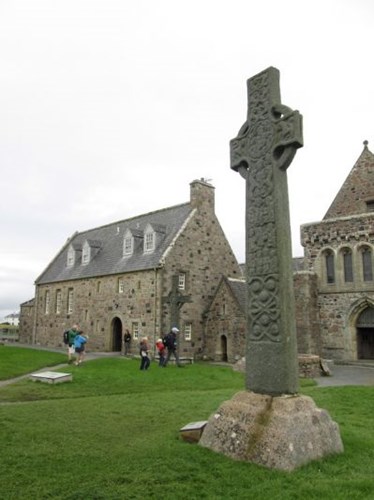 Known as the cradle of Christianity in Scotland, Iona is a magical isle. From the founding of an abbey by St Columba in the 6thcentury, to the final resting place of kings, to its current reputation as a leader in fair trade and ecotourism, this tiny emerald island off the western shore of Mull captures the hearts and spirits of those who make the pilgrimage. Visitors can take a short foot passenger ferry to tour the abbey and graveyard, and view the fascinating collection of carved crosses and stones, which, along with reproductions of illuminated manuscripts, are thoughtfully displayed and interpreted throughout the church and the grounds. 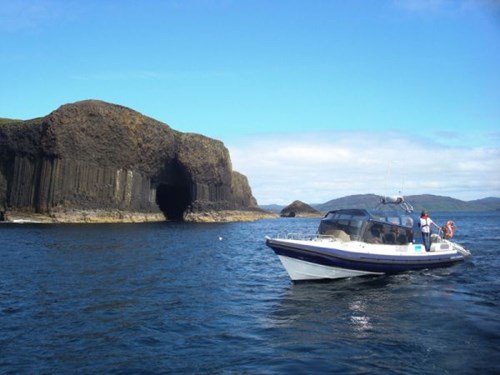 Lying six miles west of Mull, Staffa is formed of hexagonal columns that were created millions of years ago by volcanic eruptions and a vast blanket of lava that spread into the Atlantic Ocean. Years of waves crashing against these columns created the magnificent Fingal’s Cave, which inspired Felix Mendelssohn to write his famous overture The Hebrides. Staffa was hardly known until 1772, when the botanist Joseph Banks highlighted the wild, natural beauty of the island. Famous visitors have included Queen Victoria, Lord Tennyson, Jules Verne, Robert Louis Stevenson and John Keats; all fell under the island’s spell. The island came into the care of the National Trust for Scotland in 1986 and was designated a National Nature Reserve in 2001.

For further information on Mull, Iona and Staffa, visit the Holiday Mull website.

The Isle of Coll is a real hidden gem amongst Scotland’s Hebridean islands. Situated around 40 miles West of Oban, and accessed via a 3 hour ferry journey, the island is off the beaten track and offers a tranquil retreat from the hustle and bustle on the mainland. With numerous sandy beaches and an abundance of wildlife, Coll rewards the intrepid explorer looking for an island adventure.

At around 13 miles long and 3 miles wide the Isle of Coll is a great size for getting out and about – big enough to find your own peace and quiet but small enough so that you won’t get lost! With a local population of just over 200 people, don’t be surprised if you choose a beach for the day and find that you have it all to yourself. 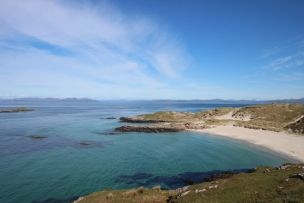 And not far from Coll is the windy island of Tiree.

Well known among windsurfers this flat island (almost a raised beach) hosts the Tiree Wave Classic each October and is world famous for its superb surf. Despite the wind (which is at its strongest in the winter) Tiree is blessed with the most hours of sunshine in the UK. Another festival success is the home grown Tiree Music Festival which has won 'Best Small Festival' and 'Best Cultural Event' - proof if needed that small can indeed be beautiful! 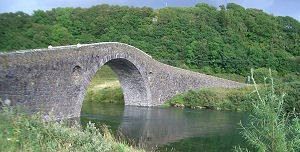 Another rewarding journey takes you south of Oban over the famous "Bridge over the Atlantic" to the Island of Seil, and by boat to Easdale Island with its fascinating history of the Scottish Slate industry.

Following the defeat of the Jacobite Army at Culloden and Bonnie Prince Charlie's subsequent flight from Scotland, the Government banned the use of the Gaelic language and the wearing of tartan and the kilt. The Islanders from Easdale and Seil would change from their traditional garb at the Inn beside the bridge before crossing to the mainland. The inn to this day is still known as 'Tigh an Truish' - "the house of the trousers".

The ferry to Luing leaves regularly from North Cuan, Seil, which is 16 miles south of Oban and is served by bus service. You can take your car, but keen cyclists may want to rent a ride at Luing Bike Hire - at only six miles long and relatively flat, a bike is the perfect way to see this historic and beautiful island. 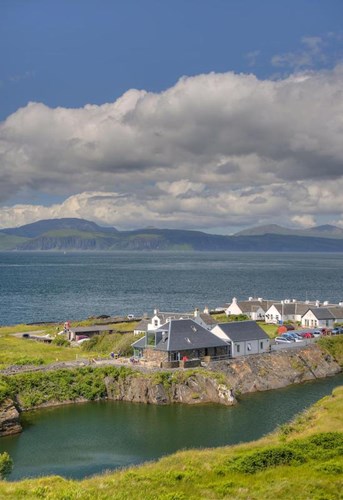 Stop at the beautifully designed Atlantic Islands Centre, where you can learn about the history and geology of the islands, along with art exhibitions and a local history and genealogy reference library. Visit the gift shop, which showcases work from local and regional artistes and follow your nose to the café and fuel up with yummy hand baked goodies or a hot lunch.