The countryside south of Oban is lush and verdant with rolling hills and spectacular coastal views. There are several attractions within a relatively short drive of Oban, among them: 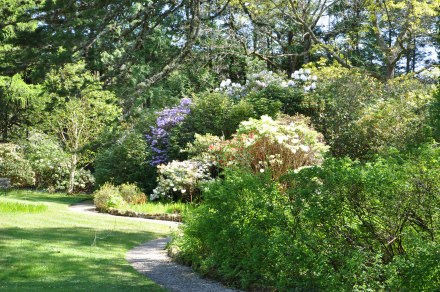 Arduaine Garden is a little slice of paradise on Scotland’s West Coast. Conceived by J. Arthur Campbell, who also built the Loch Melfort Hotel, it is a spacious tourist attraction but with the intimacy of a private garden.

Home to rhododendrons, magnolias and azaleas, and exotic palms and ferns from all over the world, Arduaine is an idyllic place to spend a few hours of calm. With lawns, colourful borders, a picturesque arboreum walk, ponds, and a wonderful variety of bird and wildlife to spot, there’s plenty to do and see. There is also a stunning cliff-top view point overlooking the Sound of Jura and its islands.

This 15th century tower house was built by the reforming churchman John Carswell, the publisher of the first book printed in Scottish Gaelic. Having undergone only minor alterations during the late 17th century, Carnasserie Castle is a superbly preserved example of 16th century architecture. Positioned on a hill overlooking the serene Kilmartin Glen, it comprises a five-storey tower house with an impressive hall attached. Blown up in 1685 by Royalist Forces during the Monmouth Rebellion, the castle fell into disuse before eventually being purchased by the Malcoms of Poltalloch in the 19th century. Today it is under the care of historic Scotland. 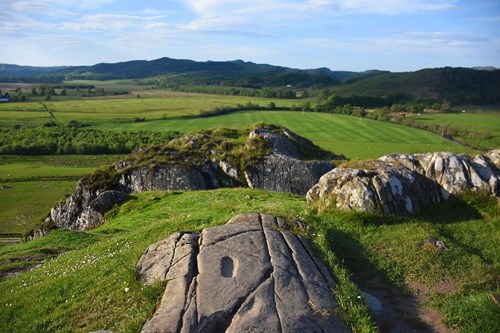 Of particular note are the imposing remains of the Iron Age fort at Dunadd, just outside the nearby village of Kilmartin. This was the capital for the kings of Dalriada, and to this day bears the mark in stone of a footprint used in their coronations. In the village itself is Kilmartin House Museum, with ‘hands on’ activities for children. Nearby Kilmartin Glen is an archaeologist’s dream. Home to more than 350 megalithic stone circles, chambered cairns, and other monuments, you can either explore them yourself or visit the museum for a more informed investigation.

The Crinan Canal stretches from Adrishaig on Loch Fyne and comes out nine miles away at Crinan on the banks of the Sound of Jura. Whether travelling by boat or on the footpath, traversing its length is a peaceful and relaxing trip, culminating in the famous basin at Crinan, where local fishermen land prawns, crabs and lobsters. It is possible to walk its whole length within an afternoon and watch the yachts and fishing boats passing through the 15 locks and just take in the superb scenery.

Easdale Island is the smallest permanently-inhabited island of the Inner Hebrides. It covers an area less than 10 hectares but has a permanent population of about 70. Easdale lies about 200 metres off the Island of Seil which itself is connected to the main land by the 200 year old Clachan Bridge, known as the ‘Bridge over the Atlantic’. Have a walk around and enjoy the tranquility of this distinctive island. A stroll to the top of the 38m high hill offers unrivalled views of the Firth of Lorn to the north and many other islands to the south. The shoreline offers the opportunity for beachcombing or soaking up the fresh Atlantic air.

Other areas of interest include the historical remains of what was once the centre of the Scottish slate mining industry. The still pools, which are a defining feature of Easdale, were once active slate quarries, and together with the wide variety of flora and bird life make Easdale unique.

Wildlife tours and boat trips to the Corryvreckan, the world’s 3rd largest whirlpool, run from Ellenabeich (mainland Easdale) and Seil. The tours take you out into the Atlantic and round numerous Islands such as Luing, Scarba, Shuna, Lunga and Jura. The whirlpool is created when strong Atlantic currents and unusual underwater topography conspire to produce a particularly intense tidal race in the Corryvreckan channel. As the flood tide enters the narrow area between Jura and Scarba it speeds up to 8.5 knots. The other attraction is the possibility of spotting, whales, dolphins, seals and sea eagles.

The Scottish Beaver Trial is a unique conservation project taking place right here in the Heart of Argyll. Wild beavers have been reintroduced back into Scotland after being extinct in the UK for over 400 years. It is the first official project of its kind in Britain and a ground breaking five year trial to explore how beavers can survive in Scotland and what effects they may have on the local environment and economy.

Four beaver families were introduced to Knapdale Forest, with kits produced each year, and visitors can explore this stunning woodland and spot the signs of beaver activity, including felled and regenerating trees, stripped branches (look out for teeth marks!) and a beaver dam. During the summer month’s tours are run Tuesday and Saturday evenings which depart at 6pm from Barnluasgan Information Centre in the heart of the Knapdale area.

Auchindrain gives visitors a fascinating and authentic insight into how people lived, worked and played in the old Highlands. Recognised worldwide as the last and most complete example of a Highland farm township, where a group of families worked the land in common. Agricultural improvements in the 18th and 19th centuries, the Highland Clearances and the development of crofting changed farming, families and the face of the Highlands forever, but Auchindrain carried on much as before, just slowly evolving. Here you have a unique opportunity to see life as it was.