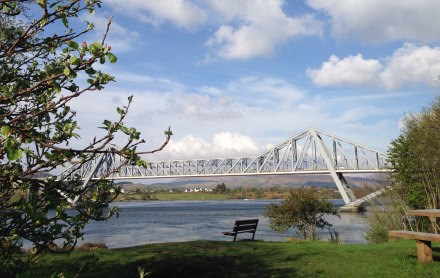 Head north from Oban stopping off at Dunstaffnage Castle and the new Ocean Explore centre at Scottish Association of Marine Science at Dunbeg – just a few miles from the town centre. Continue north to Connel and cross the iconic former railway bridge – which straddles the Falls of Lora with its spectacular tidal whirlpools. There are often kayakers to be spotted in the surf below. In the skies above keep an eye out for paragliders from nearby Oban Airport – there are scenic plane trips available on Hebridean Airways out to Coll and Colonsay and land on a cockleshell beach runway.

At scenic Loch Creran you can get a real feel for the nature of a very special sea loch and this amazing area. A fantastic source of information on rare marine life & the geology of Loch Creran has been published by local author Terry Donovan and you can download it here.

An ideal halfway stop between Oban and Castle Stalker viewpoint is The Creagan Inn on the shores of the loch and with moorings available for visiting yachts. This part of Argyll is steeped in the history of the Appin Stewart’s and nearby Castle Stalker. Robert Louis Stevenson based his novels ‘Catriona’ and ‘Kidnapped’ on the story of the murder of The Red Fox of Glen Ure in the Appin area. With darkening clouds glowering over the mountains slinking down to meet the swirling mist rising from the sea, it is easy to see the magic and mystique of this amazing area. 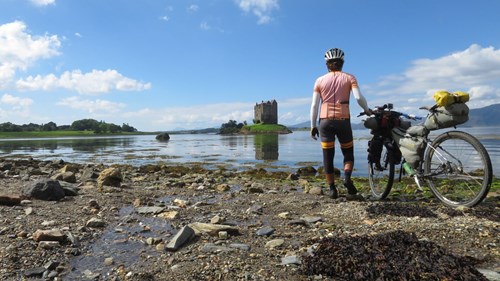 Castle Stalker was built in 1320 and passed from the Macdougalls to the Stewart Lords of Lorn in 1388. In 1497 the Stewarts and MacLarens carried out a combined raid against MacDonald of Keppoch as a reprisal for cattle reviving, but Dugald Stewart was killed and succeeded as Chief of Appin by his son Duncan. King James IV of Scotland, born in 1473, was a cousin of the Stewarts of Appin and when he came of age made frequent hunting journeys to the Highlands. It is understood that he stayed quite often at Castle Stalker, using it as a base for hunting and hawking for which he had a passion.

Sutherlands Grove has a number of trails promoted by the Forestry Commission through ancient Scots Pine and tumbling rivers towards a reservoir. Lookout for the troll at the bridge! Accessed from the main A828 just 500m north of the turn-off to Barcaldine Primary School and the Marine Resource Centre.

The information board at the car park has a number of trails for all ages including an ‘all abilities trail’.

Glasdrum (a Scottish Natural Heritage site) is two miles up the Creagan Loop towards the end of Loch Creran. A 1km stroll up and down hill through an Atlantic forest. Watch out for the butterflies. Read more here »

Another great walk is to The Fairy Bridge. Driving from Creagan, take the first roundabout off to your left and along the old part of the A828 (Creagan Loop) keeping the water on your right. Before you go over the bridge at the head of Loch Creran take the single track road (straight on) and keep going for 3 miles where you’ll eventually come to the end of the road and reach the Glen Ure gates. Park outside the gates in the car park and walk up the Forestry Commission designated path (on the other side of the road) towards the viewpoint of Glen Ure (keeping the road you’ve just come up) on your left. Just as you’re about to turn back on yourself you’ll see a small overgrown deer-path which goes over a small burn (walking boots preferred). Take this small over-grown path and walk about five minutes and you’ll discover the Fairy Bridge. Take the same path back to where you came off the main path then continue on the higher path and you’ll come to an information board looking towards Glen Ure the home of the Red Fox of Appin Murder.

Colin Campbell ‘the Red Fox’ who was the owner of Glen Ure and supporter of the Hanoverian monarchy was factor and rent-collector of the surrounding King’s estates. He was allegedly murdered on 14th May 1752 by James Stewart of the Glen who was subsequently hanged and his body displayed for 18 months at Ballachulish South Ferry point as a warning to all Jacobites. According to this online version ‘’…Robert Louis Stevenson became so fascinated with the story that he based the novels Kidnapped and Catriona on the episode…’’ Read more »

Worth a diversion from the main Oban to Fort William road the tiny hamlet of Port Appin has a passenger ferry with direct access to the Isle of Lismore and a great seafood restaurant, The Pierhouse Hotel & Restaurant, with rooms directly overlooking Loch Linnhe.

Glencoe is probably the most famous glen in Scotland as the location for the massacre of the Macdonald’s by the Campbell’s in 1692 whilst they slept. The villages of Glencoe and Ballachulish nestle under shiny hillsides, the mine-faces of which provided the slates which cover many rooftops, both locally and worldwide. The ‘glen’ or valley of Glencoe itself offers majestic views on a scale of the grandeur of the alps. A visit to the National Trust Centre is good for a rainy day.